Why We Invested In EV Realty

Segue just announced its first investment into the EV charging infrastructure space, and in doing so will be funding the buildout of large-scale commercial EV fleet charging depots. Our new partner EV Realty develops, deploys, and owns grid-scale charging infrastructure critical to electrifying last-mile delivery and service fleets in the U.S.

Segue provides development capital for clean energy infrastructure (to date for solar and storage projects), and we’re ecstatic to expand into EV infrastructure with the EV Realty team and their approach. We believe this is a very natural area for Segue to expand. The world’s transportation sector has arrived at an inflection point, and a virtuous cycle is emerging. 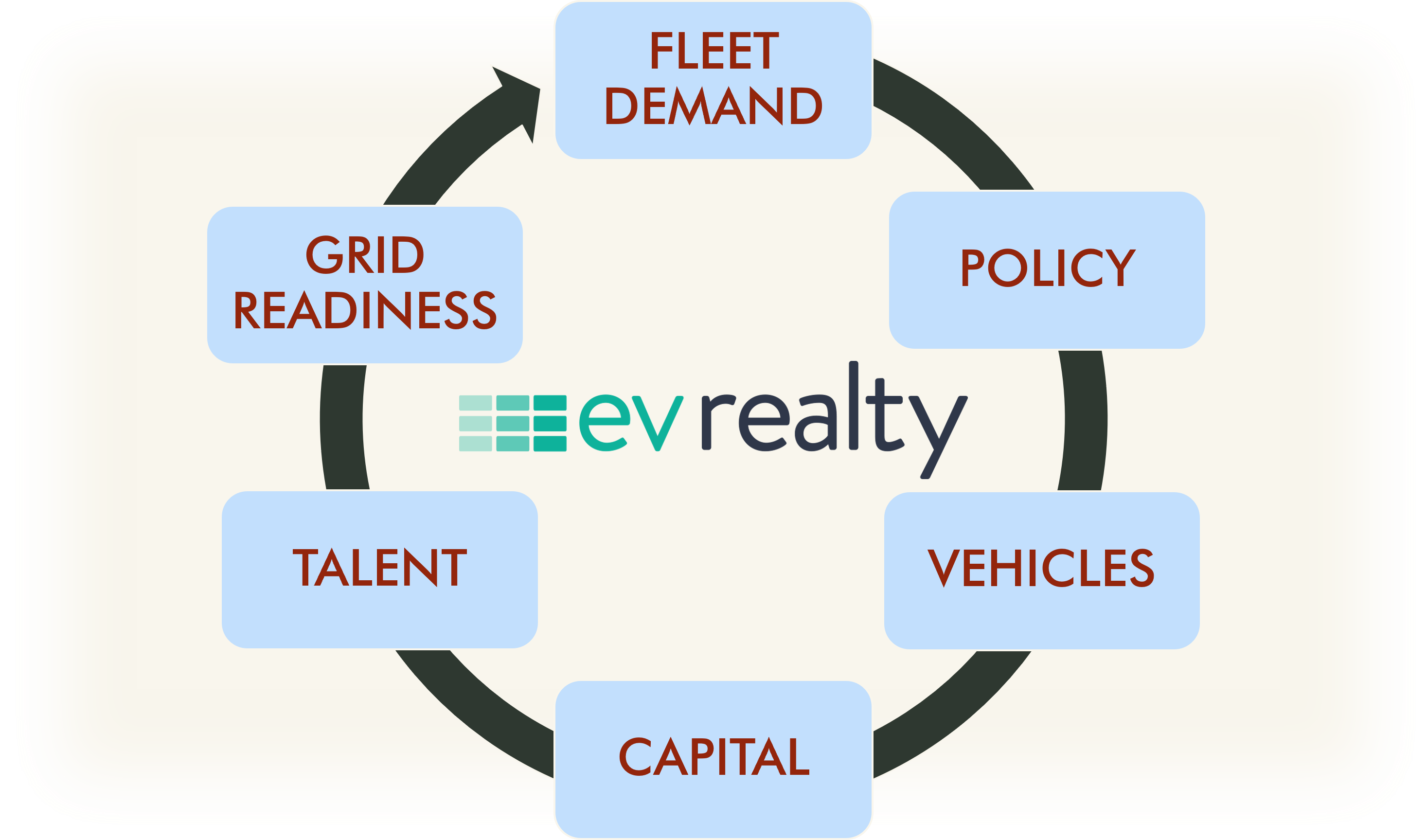 There is no obvious place where this cycle should start – each piece influences a continuous feedback loop – so it doesn’t matter what order we talk these through. But since we’re capital providers, let’s start there.

Capital: Let’s call it as it is… the capital markets have identified the EV charging sector – and more specifically the commercial EV charging sector – as a new “darling”. (We’re rolling our eyes too, but we actually think there’s validity to the frothiness.) The big dogs in the private equity and energy spaces are all angling into the EV charging sector slightly differently, but, in all cases, to the tune of hundreds of millions to billions of dollars each in commitments. And startups galore continue to attract large amounts of capital to the commercial charging space specifically. EQT made a splashy $1b commitment to launch Voltera, which, at the time, was essentially a one-person shop with a good business model. Terrawatt, Inspiration, Zeem, and others have checked the $100m+ box. The list goes on. And, like, it goes on for a while. But Segue finds this more encouraging/validating than concerning from a competitive pressure standpoint (more on that later), where the capital must only continue growing. Bloomberg New Energy Finance (BNEF) has been covering this space well all year, and here’s their take:

“BNEF expects cumulative investment in charging to exceed $360 billion globally by 2030 and over $1 trillion by 2040 to meet the needs of the electric vehicle fleet. More than $1.4 trillion is needed in a net-zero scenario where the entire vehicle fleet would be on track to be electric by 2050. Around 60% of this investment is expected to be used for putting DC fast chargers between 50 kilowatts and 1,000 kW in the ground.”

Customer Demand:  It’s happening. And not just the token pilot electric showpiece truck. Companies of all shapes and sizes are making real commitments (and purchases!) to fleet conversion. In many cases, they have to (see: policy). In other instances, they see the writing on the wall and don’t want to be the dinosaur in the eyes of increasingly environmentally-conscious customer bases. Oh, and then there’s the fact that it’s better for the bottom line. Not later…now. Laying out that math requires more modeling than one probably cares to digest in this piece, but I’ll leave you with this OpEx nugget: with $6/gallon diesel and $0.15/kWh electricity, your electric fuel cost for a medium-duty fleet is less than one-fourth that of diesel.[1] Just imagine a stable and predictable $1.40/gallon for diesel in California right now. These fuel savings alone are staring everyone in the face, and that will remain true even if gas prices settle. EV fleet transitions are now being driven by Boards and C-suites as a function of EBITDA, and the scales of the math are only tipping further to favor EVs.

The Vehicles: Wondering why your stationary energy storage batteries are so expensive these days? It’s in part because EVs of all types – including Class II and Class III commercial vehicles – are selling outrageously well. The rollouts aren’t going perfectly, but go ask any of the Tesla bears who did victory laps during Tesla’s own staggered-start rollouts about how they’re feeling now. There will be bumps, but the sheer magnitude of what has been made public and the trajectory of vehicles already hitting the roads is simply stunning. Rivian started rolling out its 100,000 vehicle order for Amazon this summer, and will already be delivering Amazon packages in 100 US cities this winter; major fleets are replacing their ubiquitous Ford Transits with e-Transits; Brightdrop/GM has massive (5,000+ vehicle) orders in from FedEx, Walmart, and others. All major auto OEMs will have commercial medium- and heavy-duty electric trucks on the streets by 2025, and many are representing that the majority of commercial truck sales will be electric in 2030. These options didn’t exist a year ago (yes… one year ago!), and they’re currently rolling out at scale. Pilots are mostly in the rear-view mirror. If you’re surprised to hear that, it’s because it happened fast, and there’s been a lot going on in the world.

Grid Readiness: America’s electricity grid is ready for this like I’m ready to land a quadruple Salchow by the next Winter Olympics. Sure, I’ve been doing a lot of Pilates and writing a blog about how important it is to increase entry speed and catch the edge at maximum torque point, but… Nah – the grid isn’t even remotely ready! The grid was never designed to fuel the nation’s transportation sector. But the good news is that FERC, the PUCs, and utilities of many varieties have come to accept two things i) as things sit right now, they are screwed, and ii) they can make a lot of money from this. And nothing drives American capitalism more than fear and money. At Segue, we are likely more concerned than most out there about the extent of the grid readiness problem that will very soon come to exist (absent solutions), but also likely more bullish on the ability of policymakers, markets, and innovation to solve this problem… and faster than most suspect. EV charging angles focused on grid readiness deserve more attention, and they’ll get it. EVR just got it from us.

Policy: Backstopping all the drivers toward electric fleets are state regulations in California (“the world’s fifth[2] fourth largest economy”), for example, that require ratcheting-up clean vehicle sales as a percent – California’s Advanced Clean Truck (ACT) regulation mandates that 75% of Class 4–8 truck sales be zero-emission by 2035, and they just added onto that the comparable demand-side Advanced Clean Fleets (ACF) regulation that mandates ratcheting up fleet purchases. And lest we ignore the why-isn’t-anyone-quite-talking-so-much-about-this-yet piece of the Inflation Reduction Act (IRA). The IRA incents parties across the supply chain to bring down the cost of rolling out commercial fleets, but the biggest piece: up to a $40,000 tax credit for each medium- or heavy-duty commercial vehicle purchased. The capital costs of commercial fleet vehicles are therefore equal or cheaper than their internal combustion engine (ICE) counterparts before factoring in the significant OpEx savings and any other state-level incentives. So, even for those that are ignoring the purely economic reasons to switch, they’ll find their way there one way or another. And finally…

Talent: The talent pool is building, quickly. Many of my early Green Charge colleagues recently jumped from storage into the commercial EV charging space. This didn’t surprise me one bit; in a prior role I built commercial EV charging financial models where the numbers always just…made sense. I’m guessing that you’ve probably noticed (or will notice if you choose to look) similar exoduses in your corner of the industry. The pool is growing – certainly aided by the plentiful capital to attract a strong pool – and this will only have feedback loops where strong talent begets stronger talent. And this may be one of the most critical pieces of this cycle: in an industry that is facing a ten-year battle to overcome some of the more difficult – yet deeply impactful – challenges that any industry will face in that time, the creativity and battle scars brought by hungry, parallel-industry veterans will be so desperately needed.

So why do we like EV Realty to go after this market?

But beyond that, we believe EV Realty is putting the pieces in place to meet the demands of a growing market with an approach that will shepherd in a new infrastructure asset class in the process. The Segue team’s background (solar and storage infrastructure development and financing) has conditioned us to the “first principals” that sound development and good offtake are critical to project success. We believe – like EV Realty – that EV charging infrastructure needs to scale up significantly, and under that context, requires a similar approach to what pushed solar into a financeable asset class attracting $33b annually[3] and counting. But, critically, this is a group of individuals that knows grandiose talk of hockey stick growth, splashy no-substance sugar-high headlines, and big, cool theoretical numbers after dollar signs don’t alone result in usable infrastructure. They know it’s gritty work, persistence, problem solving, truly symbiotic partnerships, and patience that change America’s infrastructure. Though many will talk, they will do. EV Realty is a best-in-class team that will build low-cost depots offering premium services in places where they are needed. They are creating a new infrastructure asset class alongside the likes of renewables, real estate, data centers, and others that are characterized by low costs of capital and generate stable yields. And by taking that approach, they will more quickly build the right type of sustainable infrastructure to clean up our world at a lower cost. That’s exactly where we like to focus our investments.

[1] Lots of assumptions naturally go into this calculation (vehicle type, efficiency, etc.), but this is a pretty middle-of-the-road assumption for medium-duty vehicles.